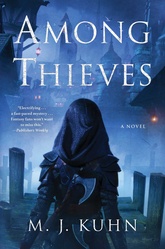 In just over a year’s time, Ryia Cautella has already earned herself a reputation as the quickest, deadliest blade in the dockside city of Carrowwick. For the past six years, a deadly secret has kept her in hiding, running from town to town, doing whatever it takes to stay one step ahead of the formidable Guildmaster.

Ryia’s path now leads directly into the heart of the Guildmaster’s stronghold, and against every instinct she has, it’s not a path she can walk alone. Forced to team up with a crew of assorted miscreants, smugglers, and thieves, Ryia must plan her next moves very carefully. If she succeeds, her freedom is won--but unfortunately for Ryia, her new allies are nearly as selfish as she is, and they all have plans of their own.