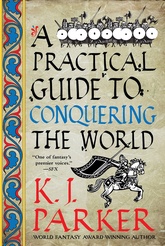 A Practical Guide To Conquering The World

An epic fantasy with a comedic twist

With A Practical Guide to Conquering the World, author K. J. Parker delivers an adventurous tale that's equally hilarious, inventive, and insightful. Focusing on Aemilius Felix Boioannes the younger, this witty novel details the intended and unintended consequences of his life, the bad stuff he did on purpose, and the good stuff that happened in spite of him. It is, in other words, the story of a war to end all wars, and the man responsible.

This fast-paced fantasy can be read as a stand-alone novel, but for those who love endings, it can also be considered the conclusion to Parker's acclaimed Siege series, which began with Sixteen Ways to Defend a Walled City and continued with How To Rule An Empire And Get Away With It.