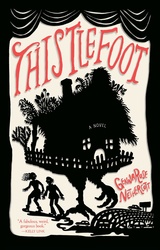 A moving tale of an enchanted home

The Yaga siblings, Bellatine and Isaac, have been estranged since childhood, separated by resentment and miles of American highway. But when they learn that they are to receive a mysterious inheritance, the siblings are reunited—only to discover that their bequest isn’t land or money, but something far stranger: a sentient house on chicken legs.

Thistlefoot, as the house is called, has arrived from the Yagas’ ancestral home in Russia—but not alone. A sinister figure known only as the Longshadow Man has tracked it to American shores, bearing with him violent secrets from the past. Ultimately, time, magic, and legacy collide—erupting in a powerful conflagration to determine who gets to remember the past and craft a new future.