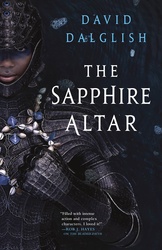 The price of vengeance

In this epic fantasy from bestselling author David Dalglish, a usurped prince must master the magic of shadows in order to reclaim his kingdom and his people.

Cyrus wants out. Trained to be an assassin in order to oust the invading Empire from his kingdom, Cyrus is now worried that the price of his revenge is too high. His old master has been keeping too many secrets to be trusted. And the mask he wears to hide his true identity and become the legendary "Vagrant" has started whispering to him in the dark. But the fight isn't over and the Empire has sent its full force to bear upon Cyrus's floundering revolution. He'll have to decide once and for all whether to become the thing he fears or lose the country he loves.