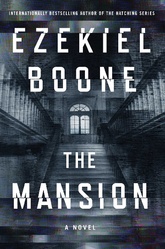 Looking for a killer smart home?

After two years in a tiny cabin, young programmers Shawn Eagle and Billy Stafford have created something that could make them rich: a revolutionary computer they name Eagle Logic.

But hard work and escalating tensions have not been kind to their once solid friendship. Years later, Billy is living in poverty and Shawn heads a multi-billion-dollar company. Unable to let the past be forgotten, Shawn resurrects his and Billy’s biggest failure: a next-gen computer program named Nellie that can control a house’s every function. He tests the program in an old mansion but something about Nellie isn’t right. Shawn is forced to bring Billy back, despite their mutual hatred, to discover and destroy the evil that lurks in the source code.