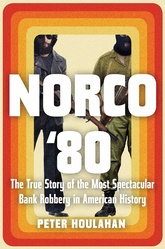 Norco ’80 is a gripping true crime account of one of the most violent bank heists in US history.

A group of landscapers transforms into a murderous gang of bank robbers armed to the teeth with military-grade weapons. Their desperate getaway turned the surrounding towns into war zones. When it was over, three were dead and close to twenty wounded; a police helicopter was forced down from the sky, and 32 police vehicles were destroyed by thousands of rounds of ammo. The resulting trial shook the community to the core, raising many issues that continue to face society today: from the epidemic of post-traumatic stress disorder within law enforcement to religious extremism and the militarization of local police forces.

"Norco '80 somehow makes meticulous research and devotion to the truth fuse with suspense and excitement until the reader is right there, a witness to this guns-blazing account of a crime that changed American law enforcement's readiness for violence in the extreme." -Joseph Wambaugh, bestselling author of The Onion Field

"Simply put, Norco '80 is one of the best true crime accounts ever written. Harrowing, incisive, and important. But also? A goddamned thrill ride. This is a book you'll read and then talk about for weeks." –-Tod Goldberg, author of Gangsterland