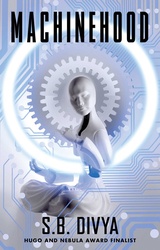 A bitter pill for humanity

Welga Ramirez, executive bodyguard and ex-special forces, is about to retire early when her client is killed in front of her. It’s 2095 and people don’t usually die from violence. Also, humanity is now entirely dependent on pills that not only help them stay alive, but allow them to compete with AI in an increasingly competitive gig economy.

All that changes when Welga’s client is killed by The Machinehood, a mysterious terrorist group that has also attacked several major pill funders. Global panic ensues as pill production slows and many become ill. Welga, determined to take down the Machinehood, is pulled back into intelligence work by the government that betrayed her. But who are the Machinehood and what do they really want?