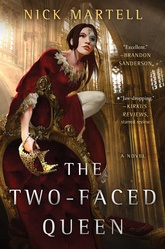 A throne to die for

The Hollows is gripped in unrest and on the brink of civil war as an insurgency of anarchists rise, and royal siblings fight for power in this second novel in the critically hailed Legacy of the Mercenary King series.

Michael Kingman thought he was going to die by the executioner’s axe, forever labeled as a traitor. Still alive, and under the protection of the Orbis Mercenary company, Michael, his family and his friends are deeply involved in the seemingly rival conspiracies that are tearing The Hollows apart. With the death of the King, both the Corrupt Prince and his sister Serena are vying for the throne, while the Rebel Emperor is spreading lies amongst the people--and all of them want Michael dead.