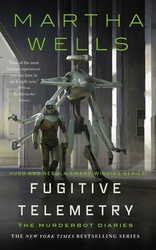 The killer return of Murderbot

The New York Times bestselling security droid with a heart (though it wouldn't admit it) is back in a new standalone novella.

When Murderbot, an antisocial killing machine, discovers a dead body on Preservation Station, it knows it will have to assist station security to determine who the body is (was). It also realizes that everyone will want to know how the victim was murdered (that should be relatively straightforward) and why (because apparently that matters to a lot of people). Yes, the unthinkable is about to happen: Murderbot must voluntarily speak to humans--again.

Having captured the hearts of readers across the globe, Murderbot has also established Martha Wells as one of the great Sci-Fi writers of today.