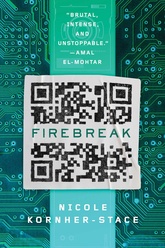 New Liberty City, 2134. Two corporations, Stellaxis Innovations and Greenleaf, have replaced the US, splitting the country’s states between them. There are nine supercities within the continental US, and New Liberty City is the only amalgamated city split between the two megacorps, and thus at a perpetual state of civil war.

Here, Mallory streams Stellaxis’s wargame SecOps on BestLife. When a chance encounter with one of the game’s rare super-soldiers leads to a side job for Mal—looking to link an actual missing girl to one of the SecOps characters. Mal’s sudden burst in online fame rivals her deepening fear of what she is uncovering about BestLife’s developer, and puts her in the kind of danger she’s only experienced through her avatar.