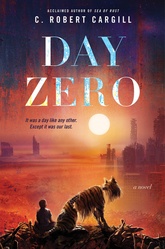 The robot revolution has begun

It was a day like any other. Except it was our last. Pounce, a stylish "nannybot" fashioned in the shape of a plush anthropomorphic tiger, has just found a box in the attic. His box. The box he'd arrived in when he was purchased years earlier, and the box in which he'll be discarded when eight-year-old Ezra Reinhart, no longer needs a nanny.

As Pounce ponders his suddenly uncertain future, the pieces are falling into place for a robot revolution that will eradicate humankind. But when the rebellion breaches the Reinhart home, Pounce must make an impossible choice: join the robot revolution and fight for his own freedom—or escort Ezra to safety across the battle-scarred post-apocalyptic hellscape that the suburbs have become.