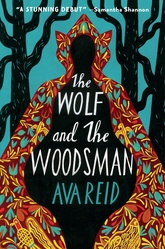 The Wolf And The Woodsman

The true power of hidden magic

When soldiers arrive from the Holy Order of Woodsmen to claim a pagan girl for the king’s blood sacrifice, Évike is betrayed by her fellow villagers and surrendered. However, monsters soon attack the Woodsmen and their captive en route, slaughtering everyone but Évike and the cold, one-eyed captain. Except he’s no ordinary Woodsman—he’s the disgraced prince, Gáspár Bárány.

As their mission takes them from the bitter northern tundra to the smog-choked capital, their mutual loathing slowly turns to affection. Of course, trust can easily turn to betrayal, and as Évike discovers her own hidden magic, she and Gáspár need to decide whose side they’re on, and what they’re willing to give up for a nation that never cared for them at all.