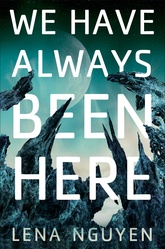 We Have Always Been Here

Dr. Grace Park is the psychologist onboard the Deucalion, a survey ship headed to an icy planet in an unexplored galaxy. Her purpose is to observe the thirteen human crew members working on the spacecraft. But frictions develop as Park befriends the androids of the ship, preferring their company over the baffling complexity of humans.

Shortly after landing, the crew finds themselves trapped on the ship by a radiation storm—and that’s when things begin to come apart. Park’s patients are falling prey to waking nightmares of helpless insanity. The androids are behaving strangely. Paranoia is closing in, and soon Park is forced to confront the fact that nothing—neither her crew, nor their mission, nor the mysterious planet—is as it seems.