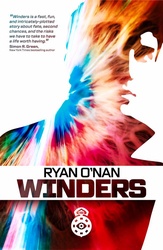 In this stunning debut by Ryan O’Nan, time itself can be wound back like a clock. The power of Winding can fix mistakes and prevent disasters. Or, in the wrong hands, it can be used as a weapon against the world.

Juniper Trask is a prodigy, raised under the Council’s strict Code, which allows Winders to exist in secret among average humans. After the shocking murder of her mentor, she is chosen to take his seat on the Council.

Charlie Ryan always knew he was different, ever since he saved his mother from a horrible car wreck. Charlie’s powers are special, and there are those who would kill to get their hands on him.

Now, Juniper and Charlie need each other if they are going to survive the future—no matter which future that may be.