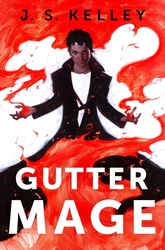 In a kingdom where magic fuels everything from street lamps to horseless carriages, the mage guilds of Penador wield power equal to the king himself. So when Lord Edmund’s infant son is kidnapped by the ruthless Alath Guild, he turns to the one person who is feared by even the most magically adept: Rosalind Featherstone, also known as the Gutter Mage.

As Rosalind delves into the mysterious circumstances behind the disappearance of Lord Edmund's son, she uncovers an old enemy from her traumatic past. But that's just the beginning, Rosalind also discovers a long-brewing plot that could ultimately lead to the death of countless innocents, as well as the complete collapse of Penadorian society itself.