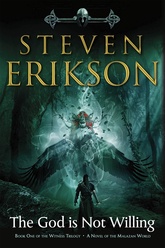 The God Is Not Willing

Return to the Malazan Empire

Bestselling author Steven Erikson continues his beloved Malazan Book of the Fallen series with this first book in a thrilling sequel trilogy.

Many years have passed since three warriors brought carnage and chaos to Silver Lake. Now the tribes of the north no longer venture into the southlands. The town has recovered and yet the legacy remains.

Responding to reports of a growing unease among the tribes beyond the border, the Malazan army marches on the new god’s people. They aren't quite sure what they're going to be facing. And in those high mountains, a new warleader has risen amongst the Teblor. Scarred by the deeds of Karsa Orlong, he intends to confront his god even if he has to cut a bloody swathe through the Malazan Empire to do so.