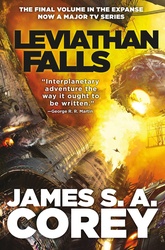 by James S. A. Corey

The powerful finale of the Expanse

The Expanse comes to an incredible conclusion in this ninth and final novel in James S.A. Corey’s Hugo-award winning space opera, a saga that inspired the Prime Original series.

The Laconian Empire has fallen, setting thirteen hundred solar systems free from the rule of Winston Duarte. But the ancient enemy that killed the gate builders is awake, and the war against our universe has begun again.

As nearly unimaginable forces prepare to annihilate all human life, James Holden and a group of unlikely allies discover a last, desperate chance to unite all of humanity, with the promise of a vast galactic civilization free from wars, factions, lies, and secrets if they win. But the price of victory may be worse than the cost of defeat.