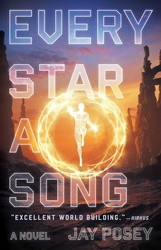 Every Star A Song

Author Jay Posey returns with the follow-up to his critically acclaimed novel Every Sky A Grave.

Far in the future, human beings have seeded themselves amongst the stars and built a near-utopia across thousands of worlds, united and ruled by a powerful organization known as the Ascendance.

Elyth, who can destroy planets with a single word, is on the run after she exposed the dark side of the organization. Though she wishes to put the past far behind her, she's quickly cornered by Ascendance agents. In exchange for clearing her name, Elyth reluctantly agrees to join an elite team and explore a new planet. But as expedition members start dying, two things become clear: the planet is conscious, and it’s trying to kill them.