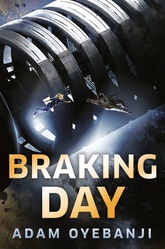 It's been over a century since three generation ships escaped an Earth dominated by artificial intelligence in pursuit of a new life on a distant planet. Now, it’s nearly Braking Day, when the ships will begin their long-awaited descent to their new home.

Born on the lower decks of the Archimedes, Ravi Macleod is an engineer-in-training, set to be the first of his family to become an officer. While on a routine inspection, Ravi sees the impossible: a young woman floating, helmetless, out in space. And he’s the only one who can see her.

As his visions grow more frequent, Ravi is faced with a choice: secure his family’s place among the elite members of Archimedes’ crew or risk it all by pursuing the mystery of the floating girl.