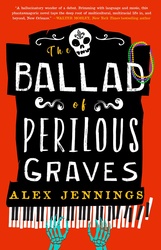 The Ballad Of Perilous Graves

Welcome to a city of music and magic

In this vibrant debut novel, set in a fantastical version of New Orleans, a battle for the city's soul brews between two young mages, a vengeful wraith, and one powerful song.

Nola is a city full of wonders. A place of sky trolleys and dead cabs, where haints dance the night away, and where songs walk, talk, and keep the spirit of the city alive. To some people, Nola might seem strange. To failed magician Perilous Graves, it’s simply home. Then the rhythm stutters.

Nine songs of power have escaped from the magical piano that maintains the city’s beat and without them, Nola will fail. Unexpectedly, Perry and his sister, Brendy, are tasked with saving the city. Even if they capture the songs, Nola’s time might be coming to an end.