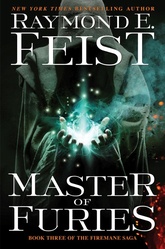 Master Of Furies: Book Three Of The Firemane Saga

Release Date: July 5, 2022Presales available for members only. To purchase this title, please log in or join now.

The final battle is here

From King of Ashes to Queen of Storms, it’s all built up to this--the thrilling conclusion to Raymond E. Feist’s epic Firemane saga.

War has swept across Marquensas. Ruthless raiders have massacred the inhabitants of Beran’s Hill, including Gwen, the beloved wife of Declan Smith. Hollow of heart, Declan swears to track down and destroy the raiders.

Meanwhile, Hava, whose gift for piracy has won her the name of "the Sea Demon," is closing in on the whereabouts of those who unleashed the murderous hordes. Her husband, Hatushaly, the last of the legendary Firemanes, seeks to control the magical powers he has inherited. But will he be able to channel his magic in time to combat the darkest threat the world of Garn has ever faced?