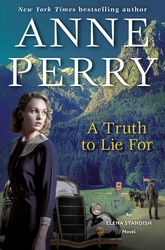 A Truth to Lie For

Saving the world from evil

It is the summer of 1934, and Hitler is nearing the summit of supreme power in Germany, his eyes set on European domination. When Britain’s MI6 gets word that a pair of brilliant German scientists have made breakthroughs in germ warfare, they send Elena Standish on a dangerous mission to get one of them out of Germany before he’s forced to share his knowledge and its devastating power with Hitler’s elite.

But the British soon learn that it’s more than just time that Elena is working against. The new head of Germany’s germ warfare division is an old enemy of Elena’s grandfather Lucas, the former head of MI6. And he’s bent on using any means at his disposal to avenge his defeat at Lucas’s hands 20 years before.