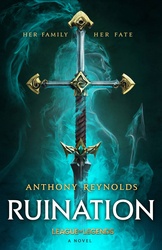 Join the League of Legends

Discover an epic tale of an empire on the verge of ruin in this first novel set in the universe of League of Legends, one of the most popular video games of all time.

Camavor is a brutal land with a bloody legacy. Where the empire’s knights go, slaughter follows. Kalista seeks to change that. When her narcissistic uncle, Viego, becomes king, she vows to temper his destructive instincts. But her plans are thwarted when an assassin’s poisoned blade strikes Viego’s wife, Isolde, afflicting her with a malady for which there is no cure.

As Isolde’s condition worsens, Kalista makes a desperate gambit to save the kingdom: she searches for the long lost Blessed Isles, rumored to hold the queen’s salvation, if only Kalista can find them.