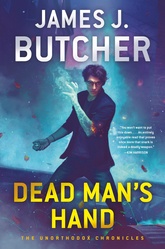 A bewitching tale of magic and murder

On the streets of Boston, the world is divided into the ordinary Usuals, and the paranormal Unorthodox. Auditors are the magical elite, government-sanctioned witches with spells at their command and all the power that comes with it. Grimshaw Griswald Grimsby is not one of those witches.

After flunking out of the Auditor training program, Grimsby tried to resign himself to life as a mediocre witch. Unfortunately, when his former mentor, the most dangerous witch alive, is murdered down the street from where he works, Grimsby is the Auditors’ number one suspect. Proving his innocence will require more than a little legwork and, after forming strange alliances, Grimsby is abruptly thrown into a life of adventure—whether he wants it or not.