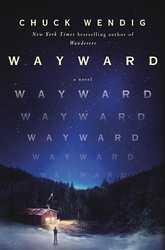 Can hope survive an apocalypse?

Five years ago, ordinary Americans fell under the grip of a strange new malady that caused them to sleepwalk across the country. Their destination: Ouray, a small town in Colorado that would become one of the last outposts of civilization. The sleepwalking epidemic was only the first in a chain of events that led to the end of the world--and the birth of a new one.

Because the people of Ouray are not the only survivors and the world they are building is fragile, the forces of brutality are amassing. And in the very heart of Ouray, the most powerful survivor of all is plotting its own vision for the new world: Black Swan, the A.I. who imagined the apocalypse.

Wayward is the thrilling sequel to the dystopian literary masterpiece Wanderers.