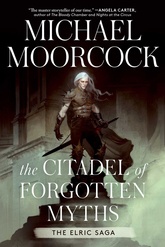 The Citadel Of Forgotten Myths

Michael Moorcock's legendary Elric returns in this exciting new prequel set within the early days of his wanderings.

Elric, the estranged emperor of the Melnibonéan empire, is struggling with his nature and the constant thirst of his soul-sucking sword, Stormbringer. Desperately trying to save his dying empire, he travels through the remnants of the land with his tragic best friend Moonglum. They're on the hunt for the great Citadel of Forgotten Myths, seeking answers about the history of their empire and its dragons, known as the Phroon.

Taking place between the first and second book in the Elric Saga, The Citadel of Forgotten Myths is perfect for longtime fans and those who are new to this epic fantasy series.