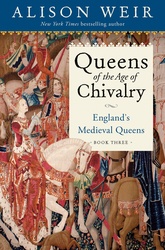 Queens of the Age of Chivalry

Bold queens in a brutal age

Packed with stories from one of European history’s most romantic and turbulent eras, Queens of the Age of Chivalry chronicles the lives and reigns of five queen consorts between 1299 and 1399. Marguerite of France was seventeen when she became the second wife of sixty-year-old King Edward I. Isabella of France dethroned her husband Edward II and ruled England with her lover. In contrast, Philippa of Hainault was a popular queen to the deposed king’s son, Edward III. Anne of Bohemia was queen to Richard II, but she died young and childless. Isabella of Valois became Richard’s second wife when she was only six years old.

The medieval era was a brutal time and it stands as a vivid backdrop to the extraordinary stories of these queens’ lives.