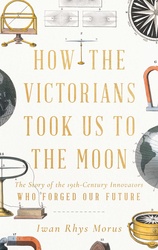 How the Victorians Took Us to the Moon

The Victorians invented the idea of the future. They saw it as an undiscovered country, one ripe for exploration and colonization. And to get us there, they created a new way of ordering and transforming nature, built on grand designs and the mass-mobilization of the British Empire's resources.

In this rich and absorbing book, a distinguished historian of science tells the story of how the future was made. From Charles Babbage’s dream of mechanizing mathematics to Nikola Tesla’s visions of an electrical world, it is a story of towering personalities, clashing ambitions, furious rivalries and conflicting cultures—a rich tapestry of remarkable lives that transformed the world and ultimately took mankind to the Moon.