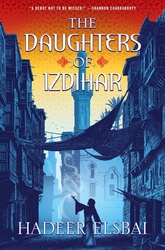 The Daughters of Izdihar

A spellbinding tale of rebellion

From author Hadeer Elsbai comes the first book in a powerful duology set wholly in a new world, but inspired by modern Egyptian history, about two young women: Nehal, a spoiled aristocrat used to getting what she wants and Giorgina, a poor bookshop worker used to having nothing. Despite their differences, they share a struggle for the rights of women and their ability to fight for it with forbidden elemental magic.

As a waterweaver, Nehal can move and shape water to her will, but she’s limited by her lack of education. Giorgina has her own secret, however: she is an earthweaver with uncontrollable powers. As tensions rise with a neighboring nation, Nehal and Giorgina find themselves struggling to earn—and keep—a lasting freedom.