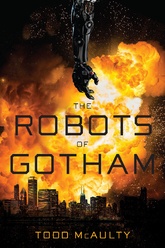 The Robots Of Gotham

Rage against the machines

After years of war, the U.S. has sued for peace, yielding to a brutal coalition of nations ruled by fascist machines. One quarter of the country is under foreign occupation and a permanent peace is being delicately negotiated with an envoy of implacable machines.

Canadian businessman Barry Simcoe arrives in occupied Chicago days before his hotel is attacked by a rogue war machine. In the aftermath, he meets a Russian medic with the occupying army, and 19 Black Winter, a badly damaged robot. Together they stumble on a machine conspiracy to unleash a horrific plague. Simcoe races against time to prevent the extermination of all life on the continent…and uncover a secret that America’s machine conquerors are desperate to keep hidden.