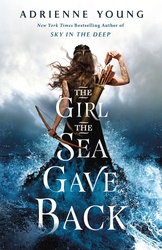 The Girl the Sea Gave Back

For as long as she can remember, Tova has lived among the Svell, the people who found her washed ashore as a child. Her own home and clan are long-faded memories, but the sacred symbols and staves inked over every inch of her skin mark her as one who can cast the rune stones and see the future. She has found a fragile place among those who fear her, but when two clans bury their age-old blood feud and join together, her world is dangerously close to collapse.

For the first time in generations, the Svell are divided. And when their chieftain looks to Tova to cast the stones, she sets into motion a series of events that will not only change the mainland forever but will give her something she believed she could never have again―a home.