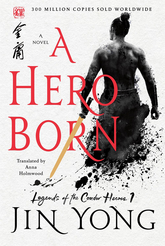 A Hero Born: Legends Of The Condor Heroes 1

Experience the Chinese epic that has thrilled the world

The world’s most widely read 20th-century writer, Jin Yong, has a literary legacy equal to that of J.R.R. Tolkien, J.K. Rowling, and George R.R. Martin. Now, after decades of international acclaim, his legendary novel, A Hero Born, is finally available in English. Filled with an extraordinary cast of characters, this stirring saga is packed with fantasy, passion, war, betrayal, and brotherhood.

After his father was murdered, Guo Jing and his mother fled to the plains and joined Ghengis Khan and his people. But what he doesn’t know is that he’s destined to battle an opponent that will challenge him in every way imaginable. With the help and guidance of his shifus, Guo Jing returns to China to face his foe and carry out his destiny.

"[Jin Yong’s] work, in the Chinese-speaking world, has a cultural currency roughly equal to that of Harry Potter and Star Wars combined."—The New Yorker