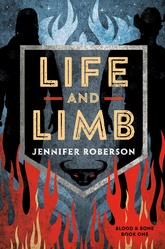 Life And Limb: Blood And Bone Book One

How the hell do you stop hell?

Gabe Harlan, ex-con biker, and Remi McCue, Texas cowboy, are informed--no, commanded--by a higher power that they must form a partnership to help save the world. Complete strangers one moment, they have now been thrust together, conscripted into heaven’s army-on-earth. While Remi is willing to believe in such things, to Gabe, newly released from prison, it makes no sense that heaven would count on humans when it has angels in its armory. Especially when the devil claims a more dangerous, unearthly weapon: demons.

Now loosed upon the earth in the first spasms of an unholy war, demons inhabit and make real the beasts of fiction, folklore, fairytales. Gods and goddesses walk the earth. Myth becomes reality; legends and lies become truths.