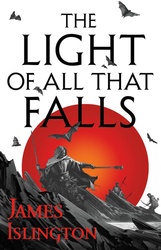 The Light Of All That Falls

An explosive ending to a magical trilogy

James Islington's bestselling debut, The Shadow of What Was Lost, began an epic tale of three friends who embraced forbidden powers to confront an ancient evil. The adventure continued in An Echo of Things to Come, as armies clashed and magic collided. Now the final battle is at hand in The Light of All That Falls, the gripping conclusion to the Licanius trilogy.

After savage warfare, the Boundary is whole again—but it may be too late. Banes now stalk the lands of Andarra, and the Venerate have gathered their armies for a final, crushing blow. Imprisoned in a strange land, Davian tries to keep the remaining Venerate from undoing Asha's sacrifice, while Caeden is confronted with the reality of a devastating plan laid centuries ago.