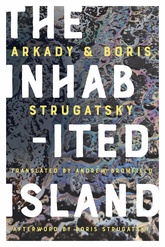 Release Date: February 4, 2020Presales available for members only. To purchase this title, please log in or join now.

When Maxim, a space explorer from Earth, accidentally discovers a planet inhabited by humanoids, who destroy his spaceship, he thinks of himself as a modern-day Robinson Crusoe. But after his experiences in the planet’s nightmarish military and mental health facilities, he begins to realize that his sojourn on this radioactive and war-scarred world will not be a walk in the park.

The Inhabited Island is one of the Strugatsky brothers’ most popular and acclaimed novels, yet the only previous English-language edition was based on a heavily censored version. Now, in a sparkling new translation by award-winning translator Andrew Bromfield, this landmark novel can be appreciated by new and current fans of the Russian sci-fi masters.