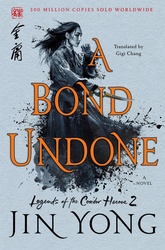 The second book in a series that’s been hailed for decades as the Chinese Lord of the Rings, A Bond Undone is now available in English for the first time.

Guo Jing and his sweetheart Lotus Huang journey through Jin and Song territory in search for answers about his past, while being hunted by someone bent on revenge. But then, he’s drawn into a deadly struggle for a martial arts manual that can give a warrior the ultimate kung fu abilities.

Meanwhile, Yang Kang, the young prince Guo Jing must face in the Garden of the Eight Drunken Immortals, is forced to choose his destiny. Will he continue to enjoy the life of wealth and privilege afforded to him by the invader of his homeland, or give up all he has known to avenge his parents?