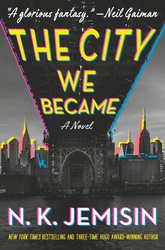 The City We Became

Culture, magic, and myths in NYC

The first book of a stunning new fantasy series from the record-breaking, triple Hugo Award-winning author of The Fifth Season, N. K. Jemisin

Every great city has a soul. Some are as ancient as myths, and others are as new and destructive as children. New York City? She's got six.

But every city also has a dark side. A roiling, ancient evil stirs in the halls of power, threatening to destroy the city and her six newborn avatars unless they can come together and stop it once and for all.

Acclaimed author Neil Gaiman has hailed this novel as “a glorious fantasy set in that most imaginary of cities, New York,” while Kirkus summed up the book in three simple words: “Fierce, poetic, uncompromising.”