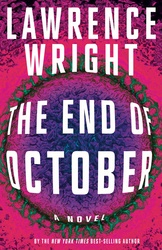 The End of October

A new kind of war

In Indonesia, 47 people are pronounced dead with acute hemorrhagic fever. When Henry Parson—microbiologist, epidemiologist—travels there on behalf of the World Health Organization to investigate, what he finds will soon have staggering repercussions across the globe: an infected man is on his way to join the millions of worshippers in the annual Hajj to Mecca. Now, Henry joins forces with a Saudi prince and doctor in an attempt to quarantine the entire host of pilgrims in the holy city. A Russian émigré, a woman who has risen to deputy director of U.S. Homeland Security, scrambles to mount a response to what may be an act of biowarfare. Already-fraying global relations begin to snap, one by one, in the face of a pandemic.

“This timely literary page-turner shows Wright is on a par with the best writers in the genre.” —Publishers Weekly, starred review