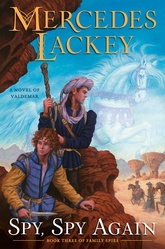 Danger is on the horizon

Mags and Amily's son Tory and Prince Kyril "share" the Gift of Farsight—although neither of them are Chosen. After much debate, the Herald's Collegium has decided to test and train them anyway. That's when the surprises start. They have two complementary Gifts that the Heralds have never seen before.

Their Gifts become crucial when Mags gets a desperate message from his cousin Bey, the head of an enigmatic assassin-tribe. Bey's eldest daughter has been kidnapped and he's calling in the debt Mags owes him to find his daughter before it's too late.

Tory is certain that if anyone can find her, he can. But that will mean traveling out of Valdemar into an unknown, dangerous country. And it will also mean taking a Royal Prince with him.