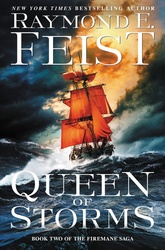 Queen of Storms: Book Two of The Firemane Saga

Release Date: July 14, 2020Presales available for members only. To purchase this title, please log in or join now.

Hatu conceals a dangerous secret. He is the last remaining member of the legendary Firemanes, the ruling family of Ithrace. Known as the Kingdom of Flames, Ithrace was one of the five greatest realms of Tembria, ruled by Hatu’s father, Stervern Langene, until he and his people were betrayed. His heir, Hatu—then a baby—was hidden among the Nocusara, who raised him to become a deadly spy.

Hatu works hard to hide his true identity from all who would seek to use or to destroy him, as fate has other plans for the noble warrior. Unexpected calamity forces him to make choices he could not have dreamed awaited him. Once more, the Greater Realms of Tembria are threatened—and nothing will ever be the same again.