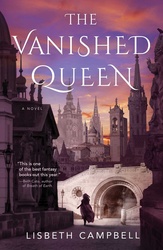 A tyrant must fall

Long ago, Queen Mirantha vanished. King Karolje claimed it was an assassination by a neighboring king, but everyone knew it was a lie. He had Disappeared her himself.

But after finding the missing queen’s diary, Anza joins the resistance group to overthrow the king. When an encounter with Prince Esvar thrusts her into a dangerous game of court politics, one misstep could lead to a fate worse than death.

Esvar is the second son to an evil king. Trapped under his thumb and desperate for a way out, a chance meeting with Anza gives him the opportunity to join the resistance. Together, they might have the leverage to move against the king—but if they fail, their deaths could mean a total loss of freedom for generations to follow.