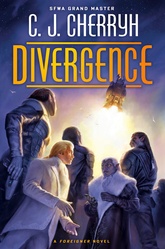 A journey of danger and deceit

Recent moves against the atevi head of state, Tabini-aiji, have prompted major changes in the Assassins' Guild, which has rooted out the Shadow Guild. With the Assassins now rid of internal corruption, stability seems to have returned.

Bren Cameron, Tabini's personal representative, was ready to take a well-earned rest—until Tabini's grandmother, Ilisidi, claimed his services on a train trip to Hasjuran. Before the journey, Tabini gave Bren a private instruction: protect her. Advise her.

Advise her—perhaps. Protect her? Ilisidi is hellbent on settling scores with the Shadow Guild, and her reasons for this trip now become clear. One diplomat and his bodyguard seem like a small force to defend her from what she is setting in motion.