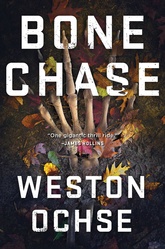 In the shadow of giants

At one time, there were giants on the earth—at least that’s what the Bible says. But where is the evidence? What happened to them? Did they ever really exist at all?

When an out-of-work math teacher named Ethan McCloud is sent a mysterious box, he and his ex-girlfriend begin to unravel a mystery 10,000 years in the making. Against all odds, he is the last hope in discovering the world’s greatest conspiracy. Pursued by both the Six-Fingered Man and the Council of David, Ethan must survive a deadly chase—and find the truth before it’s too late.

In true The Da Vinci Code fashion, author Weston Ochse delivers a taut thriller that’s packed with rival factions vying for control of the truth and the entire world.